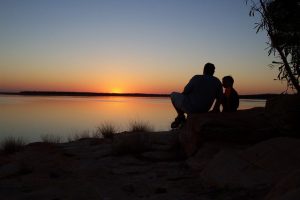 This post is the third in a series on fatherhood.

Experiencing God’s fatherhood as a son is simply not a category for many men. This becomes clear whenever I speak about God’s fatherhood to a group of men. The normal line of questions that come deal with how they can be better fathers to their own sons. It’s a perfectly understandable train of thought. If I were in the audience, my heart and mind would run in the same direction.

So what does it mean to be experiencing God’s fatherhood as a son? There is so much to say here, but I think it can be summed up in three words. A son experiences a father’s protection, affirmation, and coaching. This encapsulates the ongoing blessing a father can give (see Fathers: Blessings and Curses). Yet even the best father is but a shadow cast by the blazing light of God the Father. Whatever a son did or didn’t experience from his earthly father, he is to step forward from that shadow into the reality.

He is to walk as a treasured son.

Life as we know it now can feel scary and unpredictable. Cancer lurks. Accidents happen. Tragedies erupts. Fear can become the defining emotion for a man, leading him to hunker down and adopt a survival mode. But doing this traps a man in the web of his own fears, magnifying them into worst case scenarios. The strength and courage universally prized in manhood is sapped from him. He becomes a man to be pitied, not followed.

Life as a treasured son doesn’t ignore any of this. But it places all of it in a proximate position. The ultimate reality is the safety of being in the presence of the Father. The apostle Paul put it bluntly: Nothing can separate us from His love, not ever the haunting specter of death (Rom. 8:38-39). A treasured son is learning to remain in that love, learning to feel held in that love. Out of that bonding comes a stillness in the subterranean recesses of his soul. He knows he is safe whatever may come. It puts steel fibers into that soul, positioning him to take on risk for God and for others.

But the love of God the Father is not only to be felt but heard as well. God is a God who speaks, who spoke the world into existence. It is His voice that formed and shaped creation. That same voice can form and shape a man’s soul. The Son of God heard that voice publicly pronounced over him: “You are my Son, whom I love; with you I am well pleased” (Mark 1:11). We can only intuit here, but is seems likely that Jesus repeatedly heard that kind of affirmation from His Father in the quietness of his heart. That same affirmation is now given to all of God’s sons through Christ (see Gal. 4:6-7). We are His beloved sons.

But the experience of that affirmation is unique to each man. The Father wants to speak that affirmation to us in the way we most need to hear it. He wants to come close and voice to us how He feels about each of us. The generic love of God is to become a personalized love coming to each man. This is how we own ourselves as sons, feeling what He feels about us. I have felt the wonder of receiving such an affirmation and then had the privilege of watching other men learn to receive it. The words will be simple, but spoken in a way that knows a man’s heart. For me, it was four simple words: “You are my treasure.” I have spent the last 10 years seeking to unpack and enter the reality of those four words.

A good father not only protects and affirms. He also coaches. He takes time to instruct and encourage through failure. To walk as the Father’s son is also to receive that coaching. I know this may sound incredulous, but I think it says more about our unbelief than the reality of the Father’s love. That reality is starkly apparent when Jesus described how He lived in that coaching: “Very truly I tell you, the Son can do nothing by himself; he can do only what he sees his Father doing, because whatever the Father does the Son also does. For the Father loves the Son and shows him all he does” (John 5:19-20). That reality is to become ours through the gift of the Holy Spirit. We are to live in His instruction and coaching (see John 14:26, 16:13).

I want to state it more boldly. I think the Father is trying to coach us all the time as sons. It can come through His Word, through the wisdom of others, through a surprise coincidence, or through words quietly spoken in our hearts. The sense of that coaching is gentle but quietly firm. It never comes with condemnation or pressure. It never produces guilt or shame. I have felt His coaching on hundreds of occasions, and again watched countless men learn to receive it. It is such a game changer for a man (For more on this topic, see Chapter 6 of Heroic, “The Call of the Coach).”

Learning to Walk as a Son

So how to we enter and walk as sons of the Father? Where do we start? You can’t learn this by going to another seminar or reading another book. This is not knowing more. It is learning to feel known more. And it happens in a very unlikely place — in the silence. We push aside the scuttle and the noise. We box out the demands and the to-do lists. There, as we descend down into our souls, we meet the Father who is already living inside of us through the Holy Spirit.

There in the silence, ask God to teach you to walk as a son. Ask Him to teach you to feel His protection, His affirmation, and His coaching. He will be delighted to answer. As He does so, the epic journey into manhood will take new turns opening out into ever-increasing wonder and joy.

It is the wonder of being a son.

It is the joy of walking with the Father.