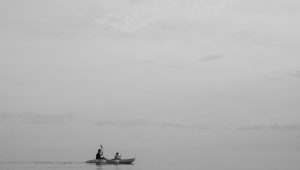 The hope for a father is etched into the masculine soul.

But it is a tenuous hope, yielding joy to some and misery to others. It is the blessing and curse of fathers. In the first post on fatherhood, I connected our desire for a father with Jesus’ message about God as Father. In this second post, I want to explore how earthly fathers shape a man’s heart. From my conversations with many men, I have seen the blessing and curse of fathers in stark contrast. For our fathers leave an imprint like no other, whether for ill or for good. Let’s start with the father’s blessing.

A Father’s Blessing in the Bible

The blessing of the father is a well-known motif in the patriarchal narratives of Genesis. Esau anguished over losing his father’s blessing (Gen. 27:38), and one whole chapter of Genesis describes the blessing Jacob gave to his twelve sons (Gen. 49). On a wider scale, the New Testament pictures Abraham as our father (Rom. 4:11-12), and the blessing that came through him is the gift of Jesus (Matt. 1:1), through whom all the nations will be blessed (Gen. 12:3).

The word blessing is one of the most important words in the story of the Bible. It connotes special favor from a greater to a lesser being. God’s intention in the Bible is to bless humanity, and the way a father blesses his children was to echo this. The blessing of the father involves several key elements, including meaningful touch, a spoken affirmation, and envisioning their future. (To read more about a father’s blessing, check out The Blessing).

I have had the privilege of watching father’s bless their children, especially their sons. I have participated in milestone birthday dinners (at 13 or 18 years) where I listened to a father speak words of affirmation and hope to his son. There have also been rituals I have seen involving campfire conversations and knightings with a sword. In all of these, a son feels radiant strength pouring into his soul. It is the gift of seeing himself as a treasured son. It is the gift of settling within him the sure hope of his manhood.

The one-time ritual or celebration is a formal declaration of what a good father has been doing all along — actively engaging his son, coaching him, disciplining him, and affirming him through word and deed. The blessing and nurture of a mother’s love is certainly important, but it is the father’s blessing that empowers the son or daughter to stand in their own gender with confidence. In our sexually chaotic times, such a blessing brings clarity and security.

The curse now plays itself out in tragic ways. A son will turn to anything to ease the pain of such a wound. The anesthetic then becomes an addiction. It could be career success or hard-core porn. It could be substance abuse or working out. Whatever the addiction, it only brings with it more chaos and destruction. Other ways include turning to a woman and demanding that she validate him as man. Or it could be turning to men in a sexual way, hoping that by homosexual pursuits, that he will find the masculinity from which he feels so separated. But these attempts only lead to more confusion and devastation. (See Chapter 2 of Heroic, “The Father Effect,” for more about how we are shaped by our fathers).

Experiencing the Blessing of the Father

After years of anger with my father over his silence and disengagement, I knew God was asking me to forgive and reconnect. That process took much time along with much failure. But I also discovered more about my father. I found out that he too had a silent father, and for the first time I felt compassion for him. He too never had his father’s blessing and lived with so much anxiety and confusion as a result. I began to bless him, affirming him and even praying with him after our conversations.

One day, as I went to see him at the retirement home, I felt the Lord urging me to ask for his blessing. I resisted. It seemed crazy. My father wouldn’t even know what to do. But toward the end of our conversation, I suddenly blurted out, “Would you bless me?” He looked surprised and changed the subject. I was so deflated. It was just what I thought would happen. This was a bad idea from the start.

Then a few minutes later, he looked at me and asked, “Would you like for me to pray for you?” I was stunned. I immediately said yes, and over the next few minutes I heard an outpouring of hope and affirmation for me with halting yet genuine words. That moment began to change so many things for me, the most important of which was opening my heart to receive the Father’s blessing and love as His son.

No doubt your story will be different from mine. For some of you, your father may be unapproachable or already dead. But the process of forgiveness, reconciliation, and seeking to bless is still the same. And remember, the Father above can supply whatever your father could not give you.

This is our inheritance from Christ. This is the great undoing of the curse.

Next week: Experiencing God’s Fatherhood as a Son

4 thoughts on “Fathers: The Blessing and the Curse”