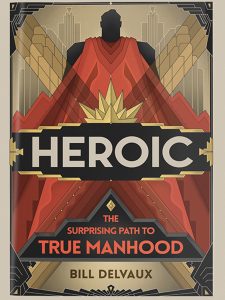 For a video version of this blog, go to https://youtu.be/hr5_pQMBgMk

Today is the official release day for Heroic: The Surprising Path to True Manhood. But what is even more surprising is how it all happened. It is really three separate surprises. Here’s the backstory on the book on this very unlikely book.

In December of 2015, I sat down in a downtown coffee shop with two friends, Dave Schroeder and Phil Davis, both of whom who worked in publishing and marketing. The idea of a new book had been simmering in of me for sometime, but I was hesitant and filled with self-doubt. In addition, the prospect of trying to write it seemed much more arduous than the first two. The pitfalls were everywhere. Could I pull it off? I spoke my concerns to my two friends. There were plenty of good books out there. And really, do we need another book for men? But they responded with another message. They felt like a new book for the young men of this millennial generation was so needed. And they asked me to get to work on it. One of them told me straight up that he wanted the manuscript on his desk in six months.

This was Surprise #1. It is not what I expected to hear. I was going to have to trust what they saw in me. I was going to have to let go of the self-doubt and the hesitation and trust them. It was a new feeling for me, one both frightening and freeing. Frightening because this was a huge risk or time, energy, and potential failure. Yet freeing because I knew they were brothers who cared for me. So I walked out of that coffee shop and surrendered to the task. It was a mountain to climb, and I started. I saw the summit far off, but it seemed so unreachable.

Six months went by, and I was only a few chapters in. The more I wrote, the steeper the climb became. I wrestled at pivotal points with how to proceed and how to say it so as to keep the reader engaged. But repeatedly, I experienced being given something at just the right time. Sometimes it would come in a conversation, other times from an article or news report, and still others through an insight that just seemed to come from nowhere. Despite the intense labor, I had a shadowy sense of being guided.

Nearly two years later, I was nearing the end of the manuscript. But throughout the whole time, another question hung in the air. Even with it written, who would publish it? I couldn’t find a book agent who would take me on. And my first two books had not sold well. Now they were a huge negative for future books. It felt like a dead-end. Had this all been a fool’s errand?

Surprise #2: But before my conversation in that coffee shop, something unusual had happened. Back in July of 2015, I was given the opportunity to be the editor of Stand Firm, LifeWay’s devotional magazine for men. When the email came about it, I first thought it had gotten sent to the wrong person. I had no editorial experience. Whey would they ask me? This was Surprise #2. But I chose to take the job, using the training from my years of grading papers as a teacher and my ongoing work with men. Little did I know that this job would be a crucial help to the book.

Surprise #3: In October of 2017, I decided to ask one of my friends at LifeWay to take the manuscript to their book publishing board (B&H Publishing) for review. Since I was already a LifeWay employee, I didn’t need a book agent here. Honestly, I didn’t expect much from it. It was more an act of desperation. November and December came and went with no word back. I dismissed it as another dead end and forgot about it. January came and went as well. Then in February, I suddenly got an email from one of the editors. He apologized for the long delay, citing the move into the new building and end-of-year activity. The manuscript had gotten buried in a pile and was just now surfacing. They would get back with me in a week or so. Well, you know how this story ends now. This was Surprise #3 and the biggest one of all. The email came. They wanted to publish the book. Suddenly, I was on the summit.

The book that should have never been written or published is now being released this week. I am still so surprised! Here’s my two takeaways from the whole experience.

If you haven’t done so, go to HeroicBook.com to experience some of the book and to order a copy.

Also, a series of 20 podcasts is being released as well, called Heroic: Conversations on Surprising Manhood. You can access them here:

PS. Take a look around the brand new website. We hope you enjoy the new appearance!