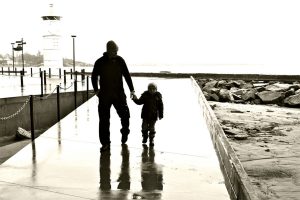 With the imminent release of Heroic next week, I wanted to give all of you another excerpt from the book, this time from the beginning of Chapter 2. Read and enjoy!

“In all my years growing up, I have only one life-giving memory of my father.

I was in the fifth or sixth grade, and during that time, I experienced a recurrent fear about him. Whenever he was late coming home from work, I imagined that he had been killed in a car accident. The fear erupted one evening as I was sitting in the living room before dinner was to be served. I was talking to my grandmother, who was visiting at the time, and waiting on my father to come home. I could feel my anxiety building as the minutes ticked by. When would he arrive? Had something terrible happened? What if he never came home? I was explaining something to my grandmother to keep my mind occupied, something I had probably learned in school. As a part of the explanation, I remember taking my two hands and holding them out in front of me, touching them and then tracing a diagonal line down with one of the hands. Just at that moment, I heard the unmistakable sound of my father’s Porsche zooming up the driveway. I felt a surge of joy run up through me. I hastily finished the explanation to my grandmother and ran into the kitchen to greet him as he came up the basement steps. He was tired and worn from the day—but he was home. The casual greeting between us communicated nothing of significance. Yet for me, it was life. I could see his face. He could see mine. That was all I needed.

Even if this story can be written off as classic separation anxiety, it is still a precious memory to me. It is the one time I felt joy in my father’s presence—such a contrast to what I usually felt.

My father was a conscientious, hard-working doctor at a time when doctors were expected to put in long hours—even over weekends. When he did come home, he would retreat to his office after dinner to keep the family finances and prepare for the next day. As a result, I have no memory of my father ever wrestling with my brother or me, reading to us at night, tucking us into bed, or telling us stories of his past. There are few memories I have of him doing anything with me. And even those memories carry a lingering sense of anxiety that he felt, anxiety that could erupt into anger when provoked. So I learned from an early age to steer clear as much as I could.

Out of this experience with my father, I intuited an idea that was to become bedrock truth for years: I am on my own. There is no one to help me. This is the way life is. The idea of asking for help or instruction rarely occurred—and then only in crisis. So much of my sadness and loneliness in high school came from such wholesale disconnection. By that time, though, the disconnection from my father had grown into disgust. I hated him and wanted out of his life. That wish came true one late summer morning as I set off for college in my red Toyota Celica jammed with books, clothes, and other personal belongings. By the time I had driven down to the bottom of our driveway, I was already congratulating myself on being able to leave him forever. I was hoping never to return.

But this is not the way it was meant to be. Our fathers were supposed to be the primary conduits of masculinity, giving us something of their noble hearts. In the way God set up creation, they were to be our first heroes, striking the masculine fire in us. How were they to do that? By word and deed.

The word is the blessing of verbal affirmation. Every boy needs to feel settled inside of himself. He needs to feel okay in his skin. That interior assurance comes best by the affirming word of the father. This is the only way a boy can separate from his mother and enter the landscape of masculinity. The affirmation can come from something as simple as a morning high-five. It can come from a compliment about a good play in the soccer game or a good grade on a spelling test. It can happen when the father notices the son being a good friend or a good leader. It can happen when the son has shown resolve in the face of pressure or courage in the face of fear. But if the affirmation only focuses on behavior or accomplishment, the son can imagine that it comes by his performance. This thinking lays the groundwork for the pressure many sons feel to keep accomplishing, fearing that failure will mean a loss of affirmation—and with that a loss of masculine connection.

But notice the difference in these two statements: “That was a great catch you made in the game today.” “I’m so glad you’re my son.” One deals with accomplishment. The other relationship. However much a boy needs to be encouraged about his performance, that is not the center of his heart. The center lies in how the father feels about him. When the affirmation is directed here, the son will feel the warmth of the fire and catch it himself. He will glow. I am not speaking in metaphor.

Recently, I attended the birthday party of a thirteen-year-old son, whose father wanted this day to be a benchmark, crossing his son into manhood. He gathered me and ten other men for a sumptuous dinner in a private room of a well-known Italian restaurant. Our meal was to be followed by offering whatever wisdom we could to the son. At first, he felt anxious, surrounded by so many men, all there to speak to him. But something shifted inside him as the men each stood to speak, starting and ending with his father. They all conveyed something important to remember as he entered manhood. They also offered verbal affirmation. They told stories of his loyalty as a friend, his standing up to bullying, his love for his sisters, and his courage and goodwill. As the evening progressed, I kept noting the son’s face. It glowed—literally. He was basking in the fire and reflecting it. It was an evening he will never forget.

But along with the verbal affirmation, something else is needed—the deed, the active engagement. Here the father comes alongside to be present in the son’s life, to play and to coach. It could be pretending to be superheroes in the bedroom with toy weapons. It could be lessons in hooking a worm so they can fish off a dock. It could be setting up the tent for a night under the stars in the backyard. It could be showing how to change a car tire on the side of the road. It could be throwing the ball or tying the knot or shooting the pistol. The activity doesn’t matter. The engagement does.

When a father chooses to play with his son and offer whatever skill he has, something is transmitted that can only come this way—the otherliness of masculinity. This otherliness is why fathers feel so heroic to boys. They are born with the distant echo of man’s untainted glory planted inside. But it is still latent and inaccessible to the son. The father becomes the primary way that sleeping memory is resurrected. The boy sees his dad in resonant color and feels masculinity strike inside of him. He awakens and longs to follow.”

Note: I regularly see my 93-year old father in a retirement home and pray with him each time I see him. It’s been quite a journey of redemption.

Final note: You can still preorder Heroic this week and receive free the 30-day Trail Guide into Manhood. Go to HeroicBook.com