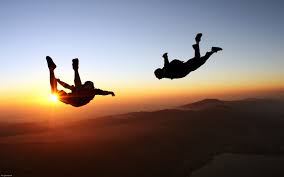 A number of years ago, I had two friends kidnap me for a day and take me skydiving. It was probably the only way I would get the nerve to do it. Once the plane had ascended to 14,000 feet, I was pushed out by our instructor. For the next 10 seconds, I fell into utter oblivion. Time, light, space, thinking, feeling…it all stopped. It’s the closest thing to actual death I have ever experienced. When I came out of it though, I was floating. I had reached terminal velocity, and even though I was still falling, I could no longer feel it. Skydivers call it free fall. They will jump hundreds of times to experience the same sensation. It’s unlike anything you can ever feel here on the ground. It was the death of that initial drop that yielded something unimaginable to me before. But the only way to get there was to jump.

The Lenten season we are now has been a part of the church’s preparation for Easter from its earliest days. Traditionally, it has been a time to enter into repentance and confession, waiting on the hope and joy of the resurrection. But first comes the jump. First comes the death.

Jesus’ death was appalling and repugnant by anyone’s call. We run out of vocabulary to describe the physical and emotional torture He endured. The horror of the cross invaded Him. It swept Him away in the flood of humanity’s sins, drowning Him in its abyss. But when all hope was gone, He burst forth from the grave, pulsating with life, life unimaginable before. Only Jesus could have made an instrument of torture into a symbol of hope. Only He could have turned its brutality into a picture of love. Only He could have made death beautiful.

But here is the resistance every son of Adam knows. He is the pushback every daughter of Eve feels. Who wants to die? Really, has it come to this? Isn’t there a more pleasant way to do religion? Isn’t there some other more genial construct to find spirituality? Can’t there be an easier way to find life with God? Do we have to enter death by repentance, detachment, and confession? We all succumb to such resistance in one way or another. We hang on to the broken shards of our existence because at least it is known. Death? That’s unknown and uncharted. The jump feels too perilous. Fear haunts us, and we resist.

But remember the skydive. The oblivion gave away to free fall. Jesus is saying the same thing. He is asking us to jump and let go of the sin that entangles us. It’s still death, but it’s a beautiful one. It will yield resurrection life in a way we could have never predicted or even understood. I believe Jesus is always coming and asking us to die. He is always asking us to jump so that we can find life.

For me, the jump has recently been letting go of a pattern of being that has held me hostage for decades. For as long as I can remember, I have felt that I must arrange for my own life, that I cannot trust anyone with the weight of my soul. It has led to a life of grasping at things and keeping people at bay. Only recently have I seen how my vow on a horizontal level has affected how I walk with Jesus. He has been asking me to repent and let Him be the good Shepherd of my soul. Like all motions of death, I have resisted. But I know that life unimaginable is beyond the repentance. I am also starting to feel it. It is knowing that He knows me like no one else and only wants good for my soul (John 10:14-15). It’s what the Scriptures call eternal life, the life we were always meant to have.

This Lenten season, what does death look like for you? What does it look like to jump out of the plane?

Whatever the death may be, know that He will meet you there. It’s the vow He makes to all His followers.