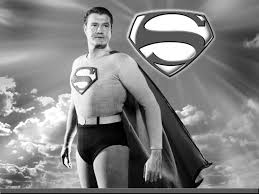 Dear friends, I am spending the whole summer working on the manuscript for the next book, Heroic, the book I have wanted to write for men for some time. Because of this, I am giving the blog a rest for the summer. But I wanted to give you one peek into the new book. It’s the story that opens Chapter 1, a story that still saddens me, setting up the tragic bind all men face, a bind that only Jesus can untangle. The untangling makes up the rest of the book. Read on…

“It’s an ordinary family photo, yet if you look closer, it contains the contradiction of the ages.

It’s a picture of me with my brother Tom. He is around four years old, making me about two. He had instigated the scene. I was just following suit, wanting to copy. But it is our mother who had made the scene possible. She had taken two towels and wrapped one around each of our necks, fastening them so that most of the towel became a cape, draping down our backs. My brother has a triumphant smile on his face, looking off in the distance with eyes that glow. My own eyes are transfixed on Tom, anticipating his next move. There we both are, ready to be Superman, ready to be “faster than a speeding bullet, more powerful than a locomotive, able to leap tall buildings in a single bound.” Those words from the 1950’s Superman TV show are etched in my memory.

Tom had probably watched the show, becoming captivated by this visitor from another planet. Superman appeared to be a normal man in disguise, but he was more than a man, and more like the man Tom wanted to be. Of course at four years of age, he wasn’t processing any of this consciously. But something about Superman had tugged at him enough that he wanted to dress up and fight “for truth, justice, and the American way.” So did I.

On one level, this family photo is the standard fare of childhood behavior. From infancy, we learn by watching and copying, whether it’s walking or talking, tying our shoes or swinging a bat. Yet there is an additional element. Tom and I were not just learning a skill, but copying a man we wanted to be like. But even here, there is nothing noteworthy. All boys look for a man to imitate, whether it’s founded in reality with a grandpa or in the imaginary with those super-action figures.

But underneath these familiar terrains lies something else, as odd as it is common, a twist that should make us pause. On a purely rational level, the story of Superman is ridiculous. No man can bend steel or fly through the air or beat a bullet. It’s all right for young boys to imitate a mythologized character approaching the status of the ancient Greek gods. But when a grown man attempts to be Superman, he is relegated to the psychotic: he has lost touch with reality. Yet no one wanted to inform us that day that we would have to give up this flight of fancy at some point, especially my mother. No one wanted to spoil our boyhood imaginations, assuming that we would grow up and get in touch with reality.

So there we both were, standing triumphantly in our backyard with capes unfurled, dressed like thousands of other boys at that time, wanting to be what we could never, ever become. It is this contradiction that interests me. It is this twist that intrigues me. What was it about being more than a man, about being Superman, that captivated all of us boys? What was it about having superhuman strength and x-ray vision, about battling great evil and rescuing the helpless, about fighting for truth and justice that so deeply resonated with those that have as yet no cognitive categories for such things? What is it about Superman that continues to captivate older audiences in all of the movie remakes? It is what we see in him, what we hunt for in others, and what we long to find in ourselves.

It is the heroic.

Yet there is more to the Superman story. It’s found in the life of the man who played Superman in the 1950’s TV show, the actor George Reeves. Here’s his story. His mother and father were divorced when he was a boy, and after their separation, his father never bothered to contact him for the rest of his life. After deciding to become an actor in high school, he got his first major break as one of Scarlett O’Hara’s suitors in Gone With the Wind. But his real claim to fame came in landing the role of Superman in the TV series that ran from 1951-57. The series was scheduled to restart again in 1959, but it never happened. Instead, the police were called to his home and found George lying naked on his bed, bleeding where a bullet had shattered his temple and ripped through his brain. The newspapers reported that George had killed himself. Rumors of his struggle with alcoholism and depression certainly corroborated this story, yet his mother was convinced that someone had murdered him instead. She attempted her own investigation using a private detective, but died before it was ever finished. George’s girlfriend at the time disappeared right after his death, never to return — even for his funeral. She had been informed that he had left everything in his will to another lover, a married woman with whom he had had an affair for years, whose husband had connections to the criminal underworld. Whether George committed suicide or was murdered, although an intriguing question, is not my point in retelling this story. It is the story itself. What did the life of George Reeves have to do with the life of Superman? Absolutely nothing. The contradiction is jarring. When I first heard this story, I was shocked and then saddened over his tragic life, cut short at forty-five years of age. Yet I was also disappointed. Even though I knew that George was only acting as Superman, I had assumed something better than this sordid tale. In the end though, he was just another man struggling with his own set of sins and addictions, struggling and losing.

He was no Superman. He was no hero.”