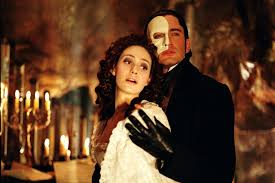 There is something about the Phantom of the Opera that has always spoken deeply to me. If you remember the story, the Phantom lives in the bowels of the Paris Opera House, fated to live alone because of the hideous face he was born with. He is a musical genius, yet he longs for love and finds the possibility of it in Christine, a young woman whose voice he has trained. As the musical proceeds, he becomes more and more consumed with demanding love from Christine, even to the point of kidnapping her and taking her down to his hideout, threatening to keep her there forever. But Raoul, Christine’s other lover, comes to rescue her from the Phantom’s clutches. As the musical ends, we find that Raoul and Christine were married, but the Phantom remained alone for the rest of his life.

I think the Phantom is such a good picture of fallen humanity. He experiences shame and hides behind a mask (doesn’t that sound familiar?). He lives alone and yet longs to be loved. Ironically, it is the very mask he hides behind that keeps him from true love and union. He demands love from Christine and manipulates her through fear to get it, failing in the end.

There is so much of my own story parallel to the Phantom. As a musician, I too have known the power of music and song. As someone bound by shame over both my body and soul, I too hid myself, wearing masks to hide behind. As someone who longed for love, I found it in a young woman when I was 15, but I too was caught in a love triangle, as she was already dating another young man. But instead of responding like the Phantom with anger and threats, I did what became characteristic of me for years: I simply capitulated and let her go. To desire love and have it denied stung me so badly that I decided it was better not to desire love any more. So I chose the route of locking my heart in a vault and trying not to need anyone. I became disciplined, dutiful…and dead.

Now I know that my story is in some ways the story of every human heart. The longing for love and union is the deepest ache we all have, yet it hurts too much to keep the longing alive when rejected or denied. So we all to one degree or another bury the ache. But this maneuver doesn’t just affect our relationships with others; tragically, it affects our relationship with God as well. How can you answer His call to be loved by Him when you have locked your true heart away? This is the dilemma we all find ourselves in, for how we solve our longing for love becomes the emotional template for how we come to God. If we have chosen to perform for love, this is how we approach God. If we try to manipulate and demand love, this is how we approach Him also. If we lock our heart away, we approach Him rationally or ritualistically.

But Jesus said something striking about our core longing at the Last Supper: “Truly, I say to you, I will not drink again of the fruit of the vine until that day when I drink it new in the kingdom of God” (Mark 14:25). The cup of wine that He is referring to is the fourth cup of the Passover, done at the end of the meal. It was the cup of consummation, referring to the pledge that God would come and take us to be His people. It is strikingly similar to what a man does with a woman as they pledge themselves to be married. The consummation would then be the wedding followed by sexual union. But here in this verse, Jesus pledges to come and take us to be with Him forever.

What if we could see the Last Supper as His way of continually approaching us, inviting us into deeper union with Himself? What if He is trying to speak to us like this each time we take that meal in church? What would it look like to hear His voice telling us of His love for us, His desire to be with us, and His commitment to see that happen forever? What would happen if we knew He desired our company, not just corporately, but each one of us individually? To begin to answer these questions is to enter the story of the Bible, the story of a Hero who came to rescue His beloved. It is the story of being so treasured and so sought after that He bled and died to prove that love.

But this story is no musical on Broadway; it’s sober history.

It’s a story worth entering.