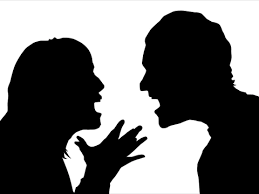 To be human is to be angry, whether it’s over political debates or marital spats. But it’s what we do with that anger that moves us toward destruction or redemption. Here’s a recent example from my own life.

I have trouble projecting my voice when speaking publicly. To make matters worse, I often drop my voice to make a point. I’ve been told this any number of times, but still forget and find others miss what I say. Recently I asked Heidi about my voice as we were driving home from teaching a class at my church. She informed me kindly but plainly that my voice was hard to hear at points. It triggered something inside. I wanted to object, defend, deny, or dismiss. I felt exposed publicly once again as someone with lousy oratory. The shame quickly turned into anger. I could feel myself getting angry with Heidi, angry at the room set-up (how absurd), and angry with myself for making the same mistake. The anger that my shame prompted is understandable, but it is self-consuming.

Then there is the anger we all feel in those places where others have wounded us—the abuse, the abandonment, the betrayal. The anger is just and necessary to our healing, but to stay there and refuse to forgive leads to hardening and bitterness. Our anger is again understandable, but it is still all about us.

Then I open the pages of the New Testament and read about the anger of Jesus (Mark 11:15-19) as He cleared the temple. The Court of the Gentiles was the one place that God-fearing Gentiles could come and pray in the temple precincts. It was a place even Jews had to walk through to get into the inner parts of the temple. But this Court had become the equivalent of an Oriental bazaar, selling animals used for the sacrificial system as well as salt, oil, and wine used in the rituals. There were already four markets set up on the adjacent Mt. of Olives where animals could be bought for that purpose. The recent use of this court for such a purpose showed flagrant disrespect for the temple, for the Gentiles, and for God’s glory. The physical force and passion required by Jesus to clear such a large area can only be imagined. What kind of anger is this?

It’s not anger about oneself. It’s anger over how sin defames God and wounds His creatures; it’s anger over the evil that we see and with the evil one who destroys. To begin to place our anger here is a part of our awakening to redemption.

This is the anger of Jesus, an anger over how sin has desecrated His creation and degraded His people. It is the reverse side of His love, a passion that hates what He sees and is determined to make it right. When we begin to feel this type of anger, we will find ourselves no longer dreading His judgment or cowering over His anger. We will instead find ourselves looking forward to judgment as the Psalmists did routinely. They ached for the day of God’s judgment, for then everything would be set straight.

How do we move toward this anger? Ironically, by growing in His love for us. As we do, we will more and more love what He loves and be angry over what He is angry. This anger will in turn motivate us to prayer or action—probably both. But the prayer and action will be for the Kingdom, for the glory latent in every human, and for the glory residing in God Himself.

The Lord’s Prayer gives us the final motive for our anger: so that God’s name and reputation could be kept pure, so that His kingdom would finally arrive, and so that His will would at last be accomplished.

Even with our anger.