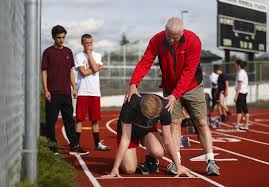 On the day track season officially began, Heidi often felt like wearing black because she was going into mourning. For the next three months as the varsity track coach, I was basically non-existent at home. I had a state-ranked team that needed training and preparation. I had a reputation to keep up. And that meant more time, more work, more preparation. I also needed larger teams to insure more victories to keep placing high in the state, and larger teams meant even more time, more work, more preparation. I think you see where this all is going. On the outside, I looked like a very successful coach, but that’s not what I felt on the inside. I was driven to succeed because that was where I found the affirmation I had failed to find in high school. In short, coaching track had become my identity. There was simply no way I could ever think about stopping. But after eight years of year-round coaching, I was drained, empty, and exhausted. On top of that, my family was suffering from my absence, and my classroom teaching was deteriorating. I knew I had to stop.

A similar scenario happened in the gospels (Mark 10:17-22). Jesus is approached by a young man with a question about his own salvation: “Good teacher, what must I do to inherit eternal life?” Yet the question was fundamentally misguided, for behind it lurked the assumption that it was ultimately something that he did. Jesus’ response was basically this: You want to know what is good: Look at God’s will in His commandments. Only by doing these will you live. And now the man revealed his blindness: he quickly replied that he had kept the law from his boyhood. Yet the initial question he posed revealed the lurking insecurity inside: Have I been good enough? Am I missing something? Then Jesus exposed the man’s real issue, his greed, by asking him to let go of his wealth. The text states that Jesus looked at him and loved him as he said this. Why is this love? Because the misguided faith this man had in himself was going to destroy him. His real problem wasn’t a deluded understanding of his goodness; it was his idolatry and attachment to wealth. The answer to the man’s initial question about eternal life was really this: Follow Me. To do this, he would have to detach from his riches so that he could attach to Jesus.

The story of the rich young man is the story of every man and woman. It is the story of our hearts clinging to something besides God and discovering that what we cling to for life is leading us to death. This is the tragedy of the fall of man, our idolatry. In modern day psychological terms, it is called addiction. What do our idols do to us?

But unlike the rich man in the gospels, I was given the grace to detach from track a number of years ago and find more of my identity with Him. It’s how Jesus loved me so well years ago. And He will continue to love us relentlessly until we let go of everything that keeps us from attaching to Him. He knows it’s the death that will truly lead to life. This is how we keep following Him.

Where do you need the grace to detach today?