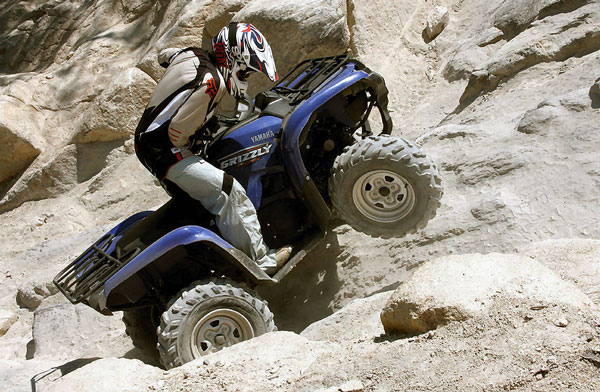 The summer before last I went mountain climbing with a friend out in Colorado. But the day before the big ascent, he wanted to take us both on ATVs up into the alpine regions on mountain roads. I remember feeling uncomfortable but willing to give it a try. But the discomfort turned into panic on the morning of our ride. I felt the fear rise up with all of the questions: Could I handle this monster machine? Would I embarrass myself in front of my friend and others? My fear grew to the point where I literally lost the contents of my intestines (no more detail needed here). Fear totally warped the reality of what was about to happen. Yet after a little instruction and some time getting used to the gears, I went from fear to interest to confidence to excitement. But at one point on the trail, there was a steep ascent where my friend told me that I could make it up if I just kept going. It looked stupidly dangerous to do, but I decided to trust him and follow. Just like he said, I made it up without stalling or flipping.

With his presence and coaching, I pushed through the fear.

We all have stories like this about being paralyzed by fear, whether it’s fear of the unknown, fear of failure or rejection, or fear of being exposed. Indeed, we live in a swampland of fear, bogged down by a plethora of phobias and terrors. A categorized listing of fears reveals that there are over 60 of them just beginning with the letter A! Every culture has universally prized the virtue of courage. Somehow we all know without being taught that we are not living the life we were meant to when we are controlled by fear. But calls to courageous living and exhortations to let go of fear often do little to change us at the core. For the real change agent is not ourselves. It’s Jesus.

His presence and coaching can push us through our fears.

He did just that with His disciples. After the feeding of the 5000, Jesus deliberately puts the disciples in a fearful position (see Mark 6:45-52). He sends them away to sail across the Sea of Galilee, while he remains behind to pray on the mountainside. The text in Mark makes a particular note that Jesus was on land while the disciples were at sea. This is not to state the obvious, but to cue the reader to note the difference the presence of Jesus always makes. When the disciples try to go it alone, there is always fear, confusion, and misunderstanding. But when He comes, everything changes!

As the wind that evening was blowing the disciples off course, suddenly Jesus appears to them walking on the water. Their fear turns momentarily into terror, as they think it’s a ghost. As He enters the boat, He confronts their fear with these epic words: “Take heart; it is I. Don’t be afraid.” Why can they find their courage now? Because Jesus is with them. The phrase “It is I” could literally be translated “I, it is.” The emphasis is on Jesus: everything changes when He is there. The early Christian martyrs knew the power of these words as they quoted this very passage when facing impending death.

We may not have to face martyrdom, but we all need to pull ourselves out of the swampland of fear. To feel His presence and hear His voice will empower us to refuse the compelling voice of fear. Imagine for a minute: What would happen if you felt Him helping you overcome your worst fear today? Or any of your smaller fears? What would you become?

Imagine and then take heart. His presence is with you and in you. Ask for His personal coaching and then listen. With Jesus, anything can happen.

That’s the adventure ahead for all who follow Him.