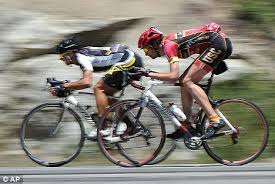 It’s one of the funniest things that has happened to me recently. Saturday morning I was biking with my friend John on a ninety-minute route. The end of our ride together was marked by a steep hill followed by a road juncture; here we would part ways and each head home. John was behind me as I began climbing the hill, but suddenly he passed me on the way up.

Then something really strange happened: instead of going straight at the juncture to head to his house, he turned right as if he were going to mine. I turned right also and saw him flying down the road, already way ahead of me. I knew John well enough to know that he liked to surprise me, taking off at unexpected moments for a race. I figured this was one of them, so I took off myself, pushing as hard as I could.

But after repeated attempts to catch him, he seemed to pull further and further away. I couldn’t believe how fast he was going nor the leg strength he had left. The race came to an end as we neared my house, and he turned back to meet me, I assume to say something triumphant. I hollered at him from a distance but got no response. As he approached, I realized why.

This wasn’t John! He had only looked like John, wearing a jersey of the same color. I had been chasing an unknown rider for two miles, leaving the real John in the dust without even a good-bye! After recovering my breath, I called him, and we laughed long and hard about the mistaken identity.

My misinterpretation of things here was just funny, but it reminded me of how I have misinterpreted things at so many life junctures, with anything but funny results. Trying to figure out life on my own, with no mentor in my early years, only added to the confusion. These misinterpretations ultimately became formatted as destructive lies about myself, others, and God, disintegrating me as a man. I became split between my outer mask and inner self, between my head and my heart. It’s a divide that nearly destroyed me.

Over the past two decades, Jesus has taken me on a  journey of becoming slowly undivided, whole and holy. It has transformed everything in my life, and now I just want to help others along the same path. That’s the reason I wrote the book Divided.

For a sampling of it, here are links to the audiotape of Chapter 1, “The Divide Opens.” Here I recount some of those early lies I believed.

I hope you find it helpful in your own journey.