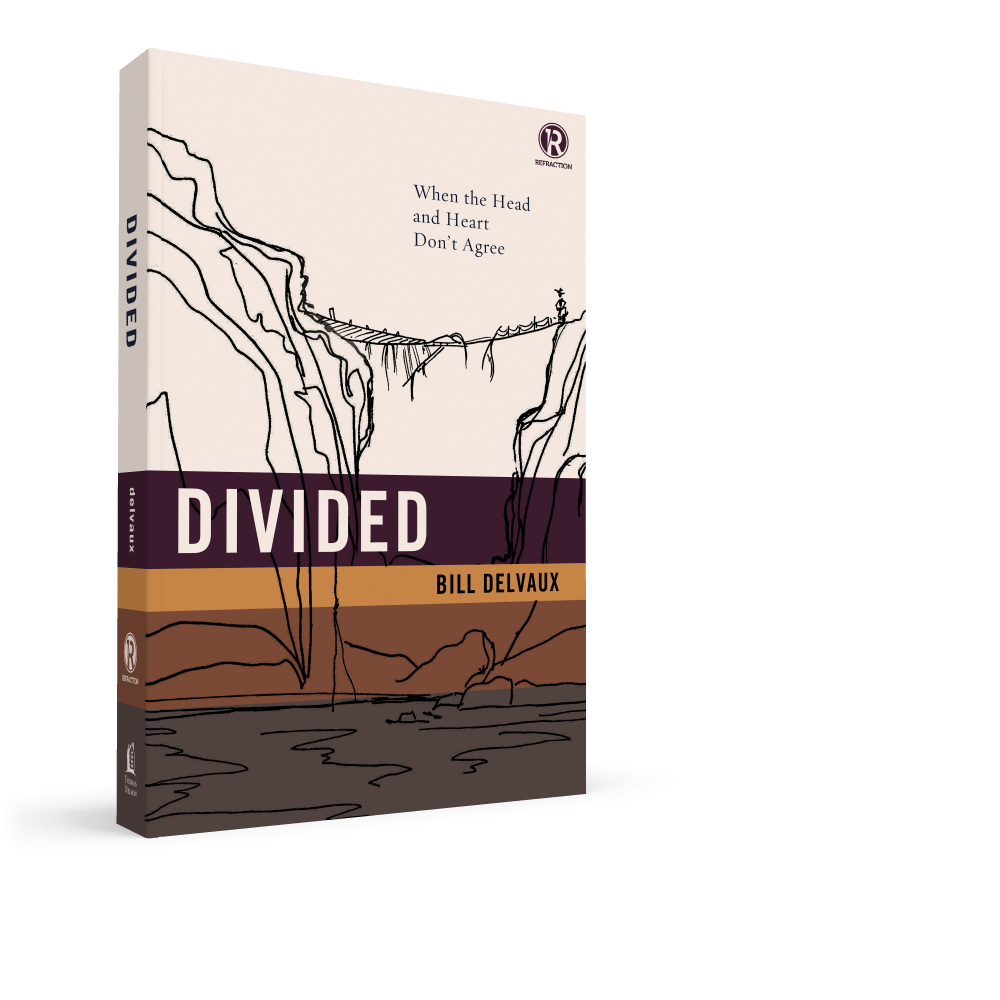 With the release date of March 10 approaching, I wanted to post another brief sampling from the next book: Divided: When the Head and Heart Don’t Agree. This one comes from the end of Chapter 2.

“Ironically, the one place that offers a cure for the divided life can end up being a place that divides us further. The Bible presents the enticing possibility of a life without division or fragmentation, and points the way to get there, through the separation Jesus experienced. He was divided from His Father, torn in two on the cross, so that we don’t have to be. We are made whole by being brought near to God. The connection we feel with him now becomes the driving passion of our lives, healing our souls, shifting our motives, coloring our thoughts, altering our behavior.

Reading the Bible is a necessary start to understanding this possibility, but reading it in and of itself won’t heal the divide. Studying passages and memorizing verses is also no guarantee. Even being a teacher or preacher of the Bible is no sure cure. For the very way we read and interact with the Bible often reflects the divide rather than heals it. How do I know this? It’s the story of my life.

From the earliest days of my newfound love for Jesus, the Bible held a significant place for me. I tried to read it regularly throughout high school and college, even though there were lapses at times. But when I went to seminary, the importance of the Bible took on a new face. I clearly remember the first time I was able to read the opening of the book of John in the original Greek. I felt awe mixed with the excitement of entering the world of the Bible this way. I spent hours in my classes researching verses, diagramming sentences, writing out passages in Greek and Hebrew, reading commentaries. It became a place of endless intellectual stimulation. When I left seminary and entered the ministry, I would put hours of research into a sermon and then tack on stories and practical points to connect to my listeners. The result? I was applauded for my ability to teach the Bible, and that affirmation drove me to work at it harder. I was determined to get the Bible into the hearts of my listeners. It became a driving passion, a consuming quest. There was only one problem: I couldn’t do it to myself.

Despite all my best intentions, I struggled to connect to the God I so passionately proclaimed from the pulpit. I struggled even more to connect to my hearers. I was a lover of the idea of God, not of God Himself. I loved the idea of loving others, but actually feeling it, walking in it? That was another matter. This is exactly where I found myself as I gave the sermon that Sunday morning, wrapped in the gauze that had become a straitjacket, one that was now suffocating me. For my life had recently unraveled over a failed church plant that I had pioneered. Remember the vow I had made to myself long ago: I would never fail in front of others. And now my worst nightmare had happened—I had failed as a church planter. I was angry with God for not coming through and ashamed of myself for not succeeding. And I had no idea where my life was going to go. The emotional vertigo I experienced during that time left me disoriented, staggering. On top of that, my newborn daughter had medical issues that would require additional surgeries to correct, and my marriage was on the ropes. The inner turmoil and anger I felt seemed like a black hole to Heidi, and she felt herself being sucked into it. She pulled away from me, fearful and desperate herself. Even now it is difficult to describe the darkness of those days. I felt myself skidding into oblivion. There were even fleeting thoughts of ending my life. Despite my extensive knowledge of the Bible, it did not counter the black depression I had plummeted into or the crushing shame I felt. In fact, it only seemed to make things worse. I could teach all the truths that were supposed to help, but nothing seemed to help me. Something was terribly wrong, but what? What was the matter with me? Where was I to turn? How was I to keep from drowning in the void?

My personal quest to know and teach the Bible had come to a blunt dead end, yet I still desperately wanted to enter its truth. But I now found the doors locked and the keys thrown away. Despite my desperate banging, there was only silence. I was not going to enter that way. I was going to have to find another path, and that would require another quest, one that would change everything. It would require not just knowing truth but entering a story. It would mean facing things I had been running away from for a long time, things we all run away from.

But that takes us to the next chapter.”

I hope you enjoyed it! The book can be pre-ordered by clicking on the banner at the top of the website.