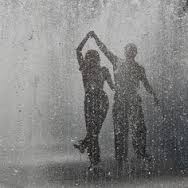 What am I thankful for this week? It came during the rain on Sunday.

Heidi and I often walk early on Sunday mornings to get ourselves moving and to enjoy the outdoors. It was cloudy this Sunday, but on the warmish side. Rain was supposed to move in later, so we thought we could get in a good walk before it hit. But twenty minutes into it, we felt raindrops. They quickly stopped, but a bit later, there was a more steady drizzle. That soon petered out, so we kept on walking, taking in the late autumn scenery. But the last ten minutes of the walk, the heavens opened and the downpour came. Without rain gear, we were soon soaked, but our spirits were not dampened. In fact, we started laughing about it. I thought about that old movie Singin’ in the Rain. I felt like that. Why?

I simply enjoyed Heidi that morning, her humor and wonder, here insights and interests. I enjoyed her heart, and I knew that she enjoyed being with me. Rather than grumbling about the rain, the way I felt made the rain almost comical, charging the atmosphere around us with a lightness of being, despite the rain.

Delight. It’s also the lesson God has been teaching me this year. The most insidious lie I ever believed began when I was thirteen. I looked in the mirror, hated what I saw, and swallowed this hideous deception: In order to be happy, I can never be myself. I must try to be someone else. It became a poison to my soul, polluting me and sickening me for many years as a man. It also became the driving engine behind so many of my core sins and addictions.

Uncovering the lie and standing against it has been an epic journey, yet the Father has been teaching me how to stay in His delight of me as His son. It is a soothing balm for that aching wound, re-imaging my core feel as a man. It is that very delight that gets turned back toward Him, as I find myself now enjoying His company. It’s what Heidi and I felt in the rain, enjoying each other.

All of this is a taste of what is coming, when we will be fully known and fully enjoyed. That’s something to be thankful this Thanksgiving,

And for the rest of our time here.