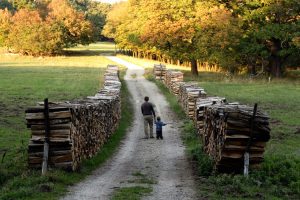 This is the first of four posts on fatherhood.

We are born hungering for a father. The father of our childhood and adolescence should touch that hunger, but it can never satiate it. A man may then spend the rest of his life projecting on his earthly father some untenable ideal, along with the inevitable disappointments. Or he may obscure the hunger by scavenging the garbage heap of the world for scraps that will momentarily distract him. Most tragically, he may seek to bury the hunger beneath layers of resentment or apathy. All of these paths do not take a man to good places. All of them lead to a kind of living death, where his soul is stretched between the poles of anguish and bitterness.

But there is another way.

We are born hungering for a father because there is a father beyond our earthly fathers. Instead of projecting, obscuring, or burying that hunger, a man can let that hunger guide him past all the dead-end side trails and wastelands. If he can keep that hunger surfaced, it will act as a kind of compass, leading him to his true destination, to the hope of his heart. It will lead him to another father, the Father.

The Revolution and the Revelation

Over 2000 years ago, Jesus walked onto the stage of history to begin a revolution. The kingdom of God was now at hand. Heaven was to come down and start reinhabiting the earth. All that was damaged and broken was to be healed. Everything would be made new. But that revolution also meant revealing the father of our heart, the Father. Until Jesus came, the use of the word father as a way to describe God was only hinted at in the Old Testament. But Jesus took that word as His characteristic way of naming God. And He asked His followers to do the same. The very prayer He taught them to say started with those historic words, “Our Father who is in heaven…” He even used the word Abba (Aramaic for Daddy) in His prayer, something unheard of before, even shocking.

How does this happen? First and foremost, it is something a man cannot do. One of the assumptions most men are weighed down under is that it is up to them to fix themselves. But the experience of the Father is a gift, given by the One Whom Jesus sent to take His place, the Holy Spirit. Perhaps the Apostle Paul put it best: “The Spirit you received does not make you slaves, so that you live in fear again; rather, the Spirit you received brought about your adoption to sonship. And by him we cry, ‘Abba, Father.’ The Spirit himself testifies with our spirit that we are God’s children” (Rom. 8:15-16).

Once a man submits to Christ, the Holy Spirit now comes to make the Father real to him. He does that by showing us how we have projected, obscured, or buried that longing for a father. He takes us through passageways of grief and detachment, hope and self-awareness. He helps surface the longing so that it becomes a cry, a yelp, a gutteral prayer from unknown depths in our psyche. And then we open the eyes of our hearts to the Father around us, the One who has been present our whole lives. We open to His work all around us in creation and in others. We open wide the aching abyss residing in our souls and trust the Father to fill it — not with things, not with gifts, not even with good feelings. We trust Him to fill it with His very self.

Life as a Treasured Son

And then a man begins to understand. What he was searching for was not the lost father of his youth, but for a Father who would reach down and unite to his soul, breathing into it purpose, provision, order, and love. And then a man understands more. He now sees that this has been the Father’s desire all along. A man’s longing for the Father now intertwines with the Father’s longing for that man. He begins to see himself the way his Father does, as a treasured son, a distant echo of what Jesus felt with the Father. The rest of his life becomes entering into this revelation more completely, until it stains his thoughts and feelings, even into his unconscious fears and compulsions.

All of life becomes walking with the Father in the cool of the day. This is the revelation of Jesus. This is the work of the Spirit. This is how all things are become new and fresh and dripping with glory.

This is how we become men.

Next post: “Our Earthly Fathers: The Glory and the Curse”